When you’re in the mood for a great children’s book, and who isn’t from time to time, the Newbery Medal will never steer you wrong. 2010 Newbery Honors books The Evolution of Calpurnia Tate and The Mostly True Adventures of Home P. Figg are just a few incredible books that come to mind. So it was with a glass of red and happy anticipation that I opened up Dead End in Norvelt by Jack Gantos, winner of the 2012 Newbery Medal. 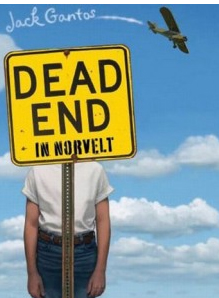 This book takes place during 1962 in Norvelt, a town in western PA where the author grew up. The town was first founded in the 1930s on the values of subsistence farming & Eleanor Roosevelt’s social principles that working families deserved a good home and plot of land in order to have a chance at making a good life for themselves. Though many of the town’s original residents have held true to the ideals that helped it function over the years, like bartering homemade jam for a doctor’s visit, the world has moved past such beliefs. On the surface, Norvelt is a dying town.

The story begins at the very start of summer vacation when Jack promptly gets himself grounded for the summer. Sounds like an extreme punishment, but he did accidentally fire a gun in the direction of a crowded drive in. Jack sees nothing but boring, monotonous days ahead. He’s a voracious reader and history buff, but after a few days indoors he desperately wants freedom. So when his mother sends him to the neighbor’s house for a somewhat unusual chore, he jumps on it.

Jack’s arthritic neighbor, Miss Volker,  is the town’s medical examiner, obituary writer and one of its original residents. As she can no longer type herself, Jack’s job it to type her dictated obituaries. It turns out to be a very busy time of year for the obituary column, a little too busy. With each death, Volker makes an effort to say something meaningful about her deceased peers, she even writes an obituary for a house, capping each with some ‘This day in history’ trivia.

The whole book is steeped in the history of people, places and significant events. In this awesome video, Gantos says:

Our history is so vastly important. … I think for kids there’s this huge blind spot. ‘What’s tomorrow going to be like?’ If you just have some sense of history- some sense of the great bones of this country, you can kind of get a sense of where you’re going forward.

This story reminds me of all the time I spent reading and wishing for interesting things to happen to me when I was a kid. Granted a Hell’s Angel never set a curse on my small town and thankfully my nudist neighbors never called on me to drive them around to examine dead bodies, but life wasn’t nearly as boring as it seemed.

My only criticism is that the ending felt a little too far fetched. For a book so rooted in death, Gantos’s characters embrace the life they have. His humor is the mix of clever and silly that children seem to love. I closed this book thinking of how important our older generations are. Gantos reminds us that they’re also stubborn and odd and filled with dreams just like everybody else.

3 thoughts on “Dead End in Norvelt by Jack Gantos”