I missed Olive Kitteridge by Elizabeth Strout when it first came out in 2008 and again when it won the Pulitzer Prize in 2009. By that I mean it didn’t exist to me until the eye-catching cover lured me in recently. Now I’m surprised I missed it because it’s set in Maine and Maine is among my 32 most desirous places in the world.

The important thing is that we found each other, right? 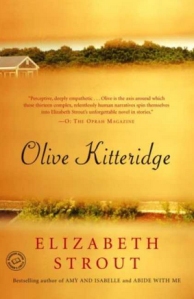 The book is composed of 13 interconnected stories featuring the normal people who pass in and out of Olive Kitteridge’s life. While reading this already widely read book, people seemed compelled to tell me how ordinary the stories are and they meant that in the best way. It’s deceptively hard to make every day life compelling in fiction.

This is a relatively thin book, but it’s not one to rush or you’ll miss the quiet changes in Olive, who still wrestles with her father’s suicide. She’s a former math teacher who lives with her husband Henry in a small Maine town. Henry’s restrained attraction to a plain young widow is the first story’s subject. It’s slow at first because not much happens on paper, then you finish and realize this marked one of the most stimulating times in Henry’s good natured life. I’m not talking about the stimulation of an affair, but of one love unrequited because of a greater love.

These are not the quiet stories they appear to be. The sunniest person may have a storm raging inside. A young man returns to his hometown to end his life and instead winds up sitting in his car talking about death and suicide with his old math teacher, Mrs. Kitteridge. Another man’s wife informs him she’s done with sex and so he explores the concept of a fuck buddy, not Mrs. Kitteridge.

Olive is a matter-of-fact woman not interested in putting on airs or humoring them from other people. But practicality doesn’t keep her from shuddering as the time she has left grows shorter and shorter. She’s looking at a photograph of her husband as a young man and thinks,

You will marry a beast and love her…

Left alone in the world, she goes from wondering when to plant the tulips to thinking back on her whole life.

This book makes me think about aging and hope for a long, full life. It also reminds me why books are such an important part of my world. We read for entertainment and escape, to broaden our hearts and sharpen our minds. Here it’s the absence of extraordinary, dramatic happenings that allows you to examine a life from the inside out. There’s poetry on every page and not a dollop of fluff.