I have yet to see the Vampire Academy movie, but the young adult book series is one of my favorites. Fortunately, Richelle Mead basically writes books faster than I read them as she’s already well into the VA spin-off, Bloodlines. The Golden Lily is the second in the series and, true to every other Mead-reading experience, I couldn’t put it down until the bitter end.

Don’t judge Mead’s books by their covers. For some reason the covers for her books feature girls sporting either judgy or come hither faces at you. Don’t hither. Disregard and proceed to Chapter One. 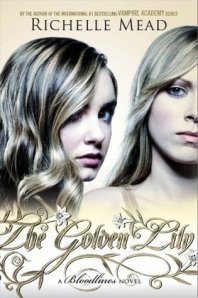 Like the Vampire Academy books, no time is lost between installments. Sydney is back in Palm Springs making sure the world doesn’t know about vampires, specifically the Moroi Queen’s younger sister and only living relative, Jill. Should anything happen to Jill, her sister would lose her throne due to archaic rules require the ruler have at least one relative. The Moroi society would descend into chaos and plenty of vampires would like to see that happen.

Protecting Jill is Syd’s top priority and she’s not alone in this task. The princess, her Dhampir guardians and Syd are hidden at a private school in Palm Springs, along with Adrian because we’ve gotta have Adrian.

The series is unfolding similar to VA with the characters discovering their world is far more complicated than imagined. As an alchemist, Sydney’s growing affection for her new vampire friends is in constant conflict with everything she was taught to believe about the blood-sucking monsters. I adore every single character and enjoyed the dynamics of the vampire/ alchemist friendships and added complexity with humans in the mix. As a human, I wasn’t thrilled with the villainous portrayal of my kind, but I’m over it now.

The magic of Mead’s storytelling is in her ability to write relationships so well. The deepening friendships and crushes overshadow how tightly plotted and layered these books are. What really makes her series stand out are the perfectly-timed wrenches thrown in that force certain characters to question themselves and those they trust. Also Adrian is a killer character on his own. Here Mead puts him in the same room with Dimitri again and again. At the same time that he’s still brooding over Rose, his eyes continue softening to Sydney until he’s a hopeless lovesick puppy. Maybe – don’t want to give anything away!

There’s romance, intrigue and some old school magic rolled into these highly readable pages. The Bloodlines series stands alone from Vampire Academy so technically you could read in without first treating yourself to VA, but don’t. Everyone I’ve lent VA to has gobbled them up and you can, too. It looks like there are 5 of them now. That’s a lot of good reading.