In some parts of this country it looks like kids are going back to school. My nieces in Pennsylvania have another 2-3 weeks of summer, so they’re still running around like drunky monkeys with no pants on during the day and no bed time at night. It’s round the clock madness. My plan was to love them from a distance until the calmer days of fall set in, but that was not my sister’s plan. And so I’m spending a few days babysitting hyper lunatics.

Already my small pile of summer reading feels out of season, or at least not what I’m looking for on these deliciously cool nights. So I bumped Sarah Dessen’s The Moon and More to the top of my pile because time is running out. This woman dominates entire shelves in the YA section of my local book store, so I figured it’s time to see what she’s about. This colorful cover charmed me when I was in the mood for something sort of coming-of-age set in a beach town. 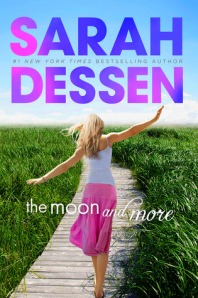 High school is over forever, but the moment for celebrating has passed. It’s barely summer and Emaline is already sweating/working in a sandbox at her family’s vacation rental real estate company. They live in Colby, a small southern beach town with a typical mix of working class locals and the affluent vacationers that fuel their summer economy. Being a permanent background in other people’s fleeting vacation makes her feel almost unreal. It gives Emaline a distorted sense that life moves forward for everyone else and stays the same in Colby. This compounds as the summer progresses and she comes to terms with the fact that she’s heading to a local college, not far away to the dream school she worked so hard to get into.

This sounds depressing, but we’re not in Emaline’s head very much. Her job keeping rental clients happy occupies most of her time. When she’s not fetching fancy toaster ovens, she’s getting over a breakup while diving head first into a summer fling. Things are chaotic in mundane ways. Unfortunately, that doesn’t leave a lot of room in the story for Emaline’s much more interesting and compelling internal struggle – the realization that she’s perhaps settling for a smaller life than she wants.

It’s obvious why Dessen’s books are popular. Her characters’ problems are universal and she conveys messy family history and conflicting emotions as succinctly as possible. What I liked most is the story’s strong sense of place and the realistic relationships she has with her family. Her mom sacrificed a lot to raise her and more than anything she wants to make her proud.

She’d wanted so much for me: The moon and more. But maybe, right now, the moon was enough.

Honestly, being immersed in Emaline’s world wasn’t fun for me. The writing is great, but the story left a lot to be desired. It marched through the summer from one problem to the next, stressing me out in small itchy ways I couldn’t scratch. I didn’t believe Emaline’s new romance because the fellow was annoying. The scenes with him felt flat and seemed more like [insert love interest filler here].

This one took me a while; it was easy to put down and a chore to pick back up. There was no dramatic question, no oomph driving me to keep reading. I’m sure I’ll pick up another Dessen book eventually because the writing is good and her fandom is pretty dedicated, which says a lot.

There might have been more beautiful places than the top of the Surfside Ferris wheel, but  didn’t know of any.