Maine’s Acadia National Park is a hard place to say good-bye to. For the few days we were there I forgot we’d have to leave. Now we’re back in Brooklyn and I keep checking the weather in Acadia as though that 8+ hour drive is only a hop away.

We came so close to watching the sun rise from Cadillac Mountain, the highest point on the eastern seaboard. We left Brooklyn at 8:30 pm and drove through the night, but road construction throughout Mass and CT slowed us down big time. It was still nice to watch the black sky turn to light blue behind the piney treeline as we entered Mount Desert Island. When we finally drove to the top of the Cadillac Mountain, we had it all to ourselves for a while. And what an introduction. After hours of night driving, the road opens up to a world of nature open for exploration.

From the top of Cadillac Mt. you’re above some clouds and have a clear view of at least a dozen small islands as well as mountains in the distance, including Mt. Katahdin, the end/beginning of the Appalachian Trail.

A number of trails converge here. Eager to stretch our legs, we took the South Ridge Trail down the mountain and discovered how handy the cairns trail markers are. They look like little stone gnomes guiding your way over bedrock trails.

The stone looks pink because it is. A sign said Cadillac Mountain is composed of crystallized magma.

I tried to sleep before the overnight drive, but sleep didn’t happen. So we stuck to easier trails on our first day, of which there are tons.

Hard to believe ocean consumes it for all but a few hours each day, but here you see Bar Island and the underwater route:

After stopping for a snack here-

-we set up our tent at Seawall Campground on what they call the quiet side of the park. Putting up a tent when you haven’t slept at all the night before and spent the day exploring and you have the caffeine shakes is a lot of fun. First we set it up backwards, facing the woods not the fire. Then I nearly axed my fingers hammering the stakes into place with the axe I was so eager to use. 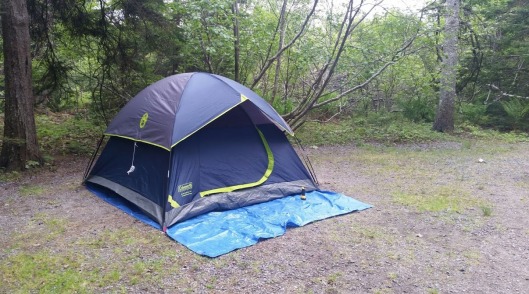 On first impression, this quiet side felt like we were too far from the park because you pass a number of private residences, but this is the side of the island with Echo Lake, Acadia Mountain and tons of other pretty spots so no regrets. We had clear skies loaded with stars on our first night. We walked about ten minutes to the sea, but didn’t see the Milky Way. The Milky Way is my unicorn. I believe in it and love it, but does it really exist? Not sure. 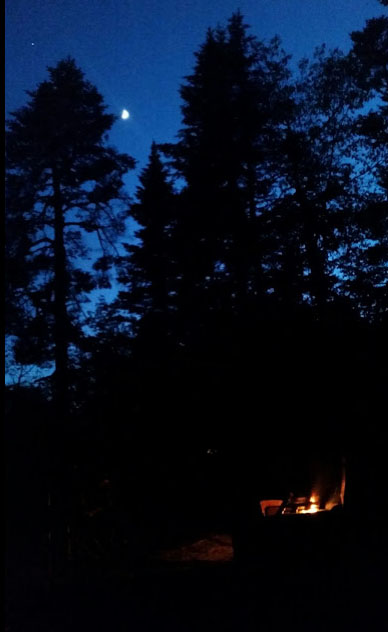 My only gripe about the Seawall campground is no showers and no decent place to wash dishes. Pans get super sooty over a camp fire and it was really hard to clean anything. There’s a camp supply store about a mile away where you can buy a hot shower. It’s $1.50 for 2 minutes. After a long drive and hiking and just being outside all day it would’ve been nice to have a little more time to clean up, but we made do. I guess it’s good to know you can clean your whole body in two minutes and still have 10 seconds for face under the water sigh time.

We discovered boyfriend has a knack for doing dishes and I love building the fire and heating the food and percolating coffee, so we’re a good team. It was a little chilly in the night, but not nearly as buggy as expected. I’ll definitely camp there in June again to avoid massive crowds in July and August. My favorite camp treat was a roasted marshmallow on a crispy chocolate chip cookie, but pre-making breakfast potatoes with seasoned bakies, onions and peppers and just heating them up on the fire is the way to go.

Our second night of camping was interesting. We wanted an early start the next day and it was too cloudy for stars so we went to bed a little while after it got dark. The fire was dying and other campers were quiet. I was about to fall into sleep when my boyfriend woke me up and whispered, “There’s someone walking around our campsite.” And there was. I opened my eyes just in time to see a human figure pass by between out tent and the fire, which was blazing.

I grabbed the flashlight, got out of the tent and had a long look around BY MYSELF. Every camp party needs at least one idiot willing to go check things out and that idiot is moi. About 20 seconds after checking that our car was locked and getting back in the tent, a car alarm went off about two sites away from us. Next thing I knew, boyfriend was sound asleep and I’m wide awake, alert to every sound.

The next morning I found sneaker foot prints in the mud that didn’t match either of our shoes so we didn’t imagine it. In the moment, hearing someone in our campsite was weird. If I wasn’t so sleepy, I would’ve been more afraid. Suddenly you’re super aware of how vulnerable you are in a tent. I did a lot of research on the minimal bear presence before going. Feeling relatively safe from bears, I dropped my guard completely. Maybe next time we’ll string up little twinkle bells around the perimeter. The squirrels would love that.

Hiking the Beehive Trail was the peak point of this trip.

After 2-minute turbo showers, we started day 2 hiking the Ledge Trail because it was near the campsite and it looked like possible rain. The Beehive Trail was the only one I had my heart set on doing this time. This is a non-technical trail with lots of ladders and iron rungs you have to pull yourself up by. It’s mostly vertical up Beehive Mountain and not one we wanted to do in rain or strong winds. Once the sky cleared, we made a beeline for the trailhead near Sand Beach. I wish we took more pictures here, but my brain was preoccupied with Don’t fall. You can do it, but don’t fall. Don’t fall.

Beehive looked like a fun .8 mile trail when I Googled images. I thought it’d be a little challenge with a lot of views. It turned out to be the most challenging trail I’ve done yet and very rewarding. I just wish I’d had on good trail instead of running shoes. That was a mistake, but we were very careful. 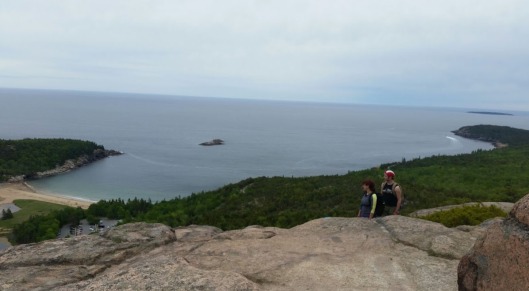 The gentle gusts of wind were’t very helpful for us first-timers. I don’t have a fear of heights, but parts were so steep they call for your full attention. Paying attention to where I put my hands and feet with each step was a thrilling first for me. Some sections didn’t have rungs to grip so we wound up holding on to trees and rocks for stability. I’m really glad we took our time to enjoy the views between the steeper stretches.

Below is Beehive from a slight distance, the trail is on the upper right.

The Precipice is supposed to be the park’s most difficult trail. We drove by it a few times, but I want to get in a lot more strenuous hikes and exposure to high cliffs first. And trail shoes. And next time I’ll leave the clunky book bag that kept throwing off my balance in the car.

Other highlights of our time in Acadia include sitting on rocks near the Thunder Dome at low tide, the Flying Mountain trail to Somes Sound, the only fjord of its kind on the East Coast and the Gorge Trail up Cadillac Mountain. We went up Flying Mountain on a morning thick with fog.

It began to lift by the time we hit the water. 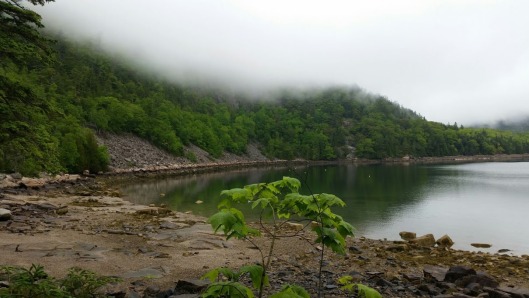 Because of the constantly changing weather, every 24-hour cycle there feels like 4 days.

In addition to the $30/night for the campsite, it cost $25 for a week pass into the park and you can upgrade that to a season pass or a National Park Pass, so they say. It’s always bugged me that so many parks and beaches charge for nature that was there long before the rangers and will be there long after. Charges for nature should be minimal if any. Or at least the pass should be like a coffee card where they punch out each day you use it for, and if you still have three days left than you can use them later.

Camping allowed us to keep the costs down. We made breakfast and dinner, and had sandwiches and lots of snacks to stay fueled throughout the day.

I always have a problem keeping food cold enough on long trips. Since my boyfriend brought meat, this was a big concern. You know what worked? In addition to a small bag of ice in the cooler, we froze about a dozen water bottles. While the ice melted after a few hours of driving, the water bottles stayed frozen until the following evening. By then we had ice cold water to drink and time to re-ice the cooler. Next time we’ll start with only frozen water bottles – no risk of leakage sogging up any mistakenly unsealed food bags.

Acadia is a giant, gorgeous playground. As cliche as it sounds, it offers a lot for everyone at all fitness levels. Trails range from very easy to strenuous, plus there’s cycling, sea kayaking, swimming and eating fancy popovers at Jordan Pond, whatever those are.

We’re going back to Acadia this fall to ride bikes on the carriage trails and do a lot more hiking. The Milky Way better be there! That gives me all summer to build up my upper body strength and practice some scrambles in the Catskills. As of 2014, an estimate of 6,000 to 8,000 black bears roam the Catskills. Bears aren’t a fear I wish to confront, but I’m adding a whistle and a bell to my pack just in case.