Two weekends ago I saw a black rat snake on my way to the Big Hill shelter in Harriman Park. My brain decided it was a long forgotten section of hose until it lifted its head and shifted for a better look at the lumbering oaf wandering off trail in its territory – the stone foundation of some mansion. It had no interest in getting to know me, but you have to wonder what it’s fellow black rats did to earn such a pleasant name.

This past weekend we drove up to Hunter Mountain. Every single fall we make plans to take the skyride chairlift up to see reds and golds spread over the Catskills and every year we miss it, forgetting that they close mid-October, next weekend. This year we only put it off to the second to last weekend. 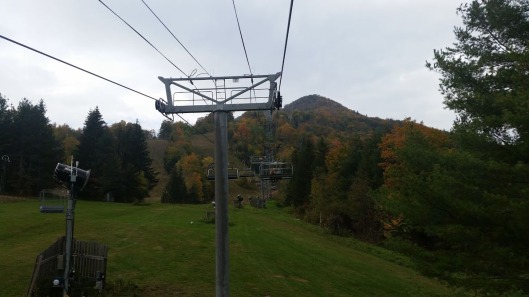 It’s an 11-minute ride to the top, about 3,000 feet. Fall up here is not quite at peak color, but it’s already more vivid and varied than fall in NYC ever gets. Hop off to see this overlook

along with ski trails,

then a boring blue bridle trail another mile to reach the fire tower at the top.

You can always climb the tower, but usually the compartment at the top is locked. Between Memorial Day and about now, volunteers usually spend the weekend in a cabin beside the tower. When we arrived a volunteer was up there so we were able to enjoy the views without gripping the rails on this windy day. Thanks, volunteers.

The world turns green again at the top. 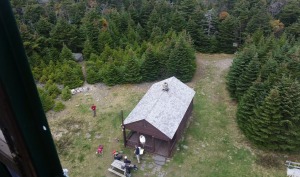 I’d love to go back in winter when snow piles up between branches.

Going down we passed a number of people drinking beer from glass boots on their way up. We took the chairlift up when it opened at 10. A few hours later we went down to a different day entirely. Hunter Mountain’s October Fest is the best one we’ve been to in the area and definitely the busiest. We missed the steinholding competition, but caught the keg obstacle roll. Raj enjoyed a post-hike plate of Schnitzel while we sat on a hill listening to Polka music.