Anybody want, nay, need a VCR with a VHS tape stuck inside it? I discovered this sweet treasure a few weeks back tucked snug behind a book of CDs. Flipping through our CD books is a pre-hike ritual. Usually it happens before dawn because we like to be out of the city and starting on the trailhead as the sun comes up, especially when hiking in Harriman park. Close to NYC, this park gets very crowded on weekends and weekend hikes are our only option lately.

Nobody’s ever accused me of being a people person, but I like seeing other hikers on the trail. I just don’t want them directly in front of me, behind me or close enough for me to hear them. It sort of ruins the illusion of being one wrong step away from being lost and hunted in the woods by a crafty witch.

I guess it could’ve sufficed to say we woke up early for our Lemon Squeezer hike. This isn’t the same pricey climb by the Mohonk Mountain House. This is a free 7+-mile hike with more than 10 trail switches. It’s very easy to get lost in the spider web of intersecting trails huddled up in this section of the park. We brought a map and printed directions from HiketheHudsonValley, a thorough site which hasn’t steered us wrong yet.

The route begins on the Appalachian Trail through a frosted misty meadow. The AT takes you up and then down to Island Pond.

Shortly after, you hit the Lemon Squeezer, a fun rock formation for those who enjoy a modest scramble and squeezing themselves through some not-too-tiny spots. 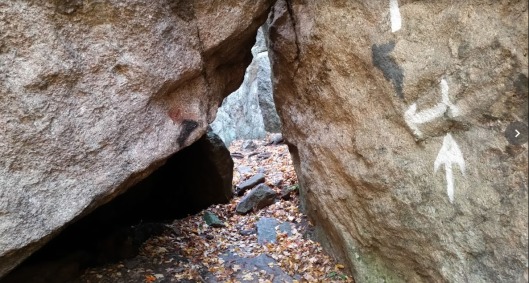 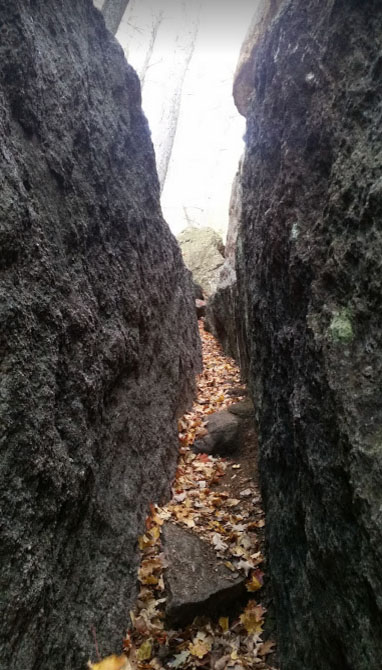 After the squeeze we said good-bye to the AT and backtracked to pick up our next of many rolling trails. Again, we lucked into going in the opposite direction of the crowd.

My favorite section came near the end on the White Trail as we made our way through the Valley of Boulders. Maybe you can’t guess from the cryptic name, but there are boulders everywhere. Traveling through calls for hopping from rock to rock. We ate lunch by a cascading stream, enjoying what felt like the aftermath of that scene in The Hobbit when misty mountains battle each other.

Little did I know what awaited.

This year we’ve bagged a handful of peaks towards our 35er goal, climbing the 35 Catskills peaks over 3500 ft. We’ve ascended, scrambled, tried some beginners’ bouldering, crossed streams, peeked over cliffs and out from fire towers, and even got to hike along a ridge. All without incurring much in the way of injury other than some sore muscles.

The many trail switches along this route form a rough loop, bringing you back to the meadow along the AT. This is a strait trail with a flat hard-packed dirt surface. Easy as la la la. I look over at this ghostly tree with green vines up one side and orange vines woven through the other. Then I’m on the ground with a bloody knee because a straight, flat walk to the car was just too much. I’m happy to report my favorite pants for hiking didn’t rip. Just my flesh.

My true scar stories are no fun. How’d I get the crescent on my left knee? Well, I bumped it while washing the car when I was 8 and there was so much blood I wasn’t allowed to go inside until hosing off and I probably needed stitches but we don’t roll that way.

So this post gets a makeover if my papery knee scars yet again. The revision will include misty mountains fighting, me saving a puppy and flying boulders. Technically, this day did include mist, there were puppies on the trail, Raj does have a charming habit of kicking back rocks when he leads and I am kind of a hero to animals who don’t need saving. So that’s the story if it scars.