Our bookish side of the internet is rapidly filling with Best Reads of the Year lists. Lists. Lists. Lists. I’m getting fat enough on these lists to hibernate. Too slow to keep up, but at the same time cannot resist studying them as if they hold the key to my future happiness. Doesn’t matter who wrote it or where it’s published, if it’s a list about books I’m there to gorge.

No lists from yours truly though. Currently, I’m still working through October’s findings, including Helen Oyeyemi’s White is for Witching. This book came out in 2009, but I never heard of it till browsing through what else but a big fat list of must-read horrors. Though fall is peak season for ghoulish delights, horror is a year-round genre. That said, this one is perfect company for winter’s solitude. I love holiday cheer and all, but sometimes you need to cut the warm and fuzzy merriment with a hefty dose dark chills.

And would you look at this cover. I didn’t stand a chance: love at first sight. 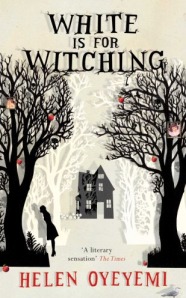 White is for Witching by Helen Oyeyemi

Nan Talese is the publisher, so right away I knew this was going to be an extremely well written novel. But as for what to expect of the plot and characters, forget it. Reading this is like making your way through a narrative touch tunnel. From the beginning you learn that at some point in the near future Miranda will be in the ground beneath her mother’s home with an apple in her throat. I’ll probably have to read this one a few more times before accepting that we’re not fully meant to understand the why or how, that perhaps Miri was always going to be out of reach.

Miri and Eliot are twins living with their father in their mother’s childhood home on the chalky white cliffs of Dover. Miri has pica, a disorder that gives her an appetite for inedible things like plastic and light bulbs. Her snack of choice is chalk, fittingly. When her mother is murdered in Haiti, the illness takes a stronger hold until she’s institutionalized for a spell. She returns home changed. Pica is killing this once beautiful girl and all her dad can do is take her chalk and beg her to eat real food. She tries. It doesn’t help that their home is haunted. Haunted by the perfect figures their mother drew, by faces that look just like them only with jagged teeth.

They didn’t have eyelids because you missed things when you blink.

Miri goes away to university, questions the nature of existence and tries to move past the fateful words her brother said to her on the night their mother was murdered in a land far away. She falls in love, but not even her girlfriend can save her once the house wants her back. Perhaps because she suspects she’s already dead.

You have to pay close or attention or the details will get away from you. I felt a little paranoid reading this because it jumps around in time and perspective without calling attention to the shift. One paragraph you’re in Miri’s POV, then Eliot’s, then the house’s, then one of the ghost’s. Oyeyemi has you turning the pages thinking about why curses are passed down for three generations. Miri blames herself for her mother’s death, wanders how she lived a normal life with the curse.

It was like dancing with a mask that was attached to a stick – she dared not lower it, no matter how tiring it was to hold the mask up.

I enjoyed this book. It has a few eerie moments throughout; the scariest part comes not from the ghosts or neighborhood kids with knives, but the way both the reader and Miri sense what’s coming from the beginning and there’s nothing either can do to change it. If that’s the nature of a curse then they’re far more frightening than zombies, ghosts and creepy old dolls combined.